Who Is Held Liable in a Roundabout Car Accident in Florida? 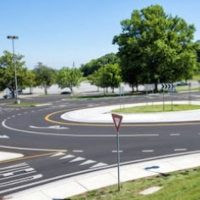 Intersections are one of the most dangerous areas to drive, causing a great number of accidents. But what if there were a way to do intersections differently, in ways that they could still move traffic, but significantly lower the amount of car accidents that happen? It turns out that there is such a way—although whether the United States is willing to adopt it, is another story.

What is a Roundabout?

The answer is the roundabout. You’ve probably seen a roundabout; they are used to some degree in the United States, just not in major intersections. In a roundabout a traffic intersection is a circle, with little “off ramps” from the circle, where vehicles can go left, right or straight, just as they would in an intersection controlled by a traffic signal.

The roundabout has no signals. The vehicles simply go around the circle and exit wherever they need to exit.

There is also science behind why roundabouts reduce accidents. One obvious reason is that in a roundabout, all cars are going in the same direction (in America, that’s to the driver’s right side). Yes, a car can still sideswipe another car, or get into a lane change accident, but these tend to be much less severe accidents than the head on, full speed collisions that happen in traditional intersections.

Speaking of speed, the roundabout is a natural inhibitor of speed; cars are simply forced to slow down in order to navigate the roundabout. The lower speed makes any accident that does happen, much less severe.

Roundabouts also tend to curb the problem of distracted drivers. Look at your phone for a second, and you can easily miss a stop sign or traffic signal. However, a roundabout is large in area and therefore easily noticeable, which makes them hard to miss, even for the most easily distracted drivers. The change in the road’s direction (as well as whatever objects are in the center of the roundabout) are just very hard to miss.

With all the improvements in safety, you’d think roundabouts were less efficient but they are not. They actually move traffic more efficiently and quicker than the standard intersection.

There are some drawbacks to roundabouts.

The first is simple unfamiliarity; many drivers just aren’t used to navigating roundabouts, especially in more urban and congested areas where there are fewer of them.

The other problem is land; roundabouts are bigger, physically, than intersections and take up more land. Commitment to roundabouts would take the space to actually build them, especially in busier areas, where traffic would require that they be bigger with more lanes.

*Call the Fort Lauderdale personal injury attorneys at Rosen Injury Law today for help if you are in a car accident.

By Rosen Injury Law, P.A. | Posted on December 13, 2022
« Is There Any Way to Defeat a Hold Harmless Clause?
Navigating Florida Injury Claims: Should You Hire a Lawyer? »